“What she saw changed everything.” 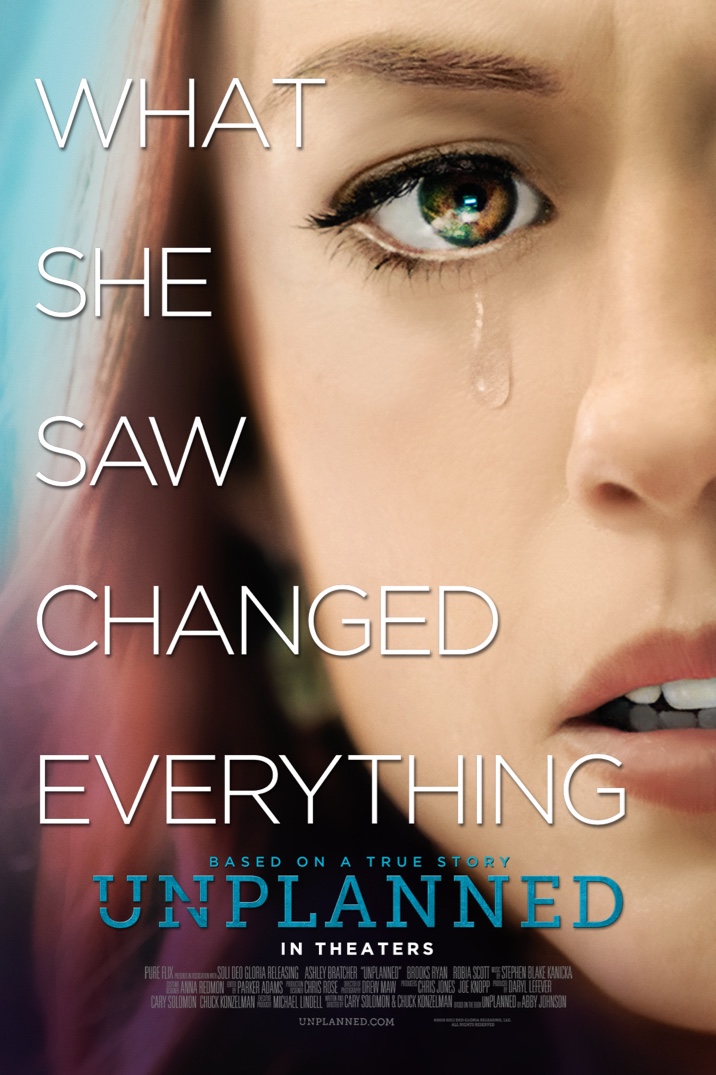 When Unplanned finally came to my small-town theater, I was excited to support this film that was unapologetically pro-life. Based on the true story of former Planned Parenthood Clinic Director, Abby Johnson, Unplanned is a movie that stays with the viewer long after the credits roll.

There are some difficult scenes to watch, namely:

– At the beginning when Abby is called to assist with an abortion,

– The scene with Abby in the bathroom after taking the abortion pill RU-486,

– The scene with the young girl who nearly died when her uterus is perforated during an abortion,

– And when Abby is called into the POC room at the beginning of her tenure at Planned Parenthood and we witness the tiny parts of a baby needing to be reconstructed to be sure the doctor removed all parts during the abortion.

Disclaimer: I did avert my eyes during several of those scenes.

There is also some minor language throughout the film.

Perhaps one of the ironies I discovered with the Unplanned movie is that horror flicks that garner an R rating show disgusting and oftentimes perverse themes. Bloody corpses, zombies, and the like are commonplace for that genre. (You can probably sense that I am not a horror flick fan and have seen only one in my life as a teen, and one I regret subjecting my eyes to).

In contrast, Unplanned shows the reality on film of tiny babies being murdered. It’s truth, not something from someone’s imagination like a horror film.

I loved how both Abby’s husband and her parents, while in disagreement over her choice of career, stood by her and prayed for her heart to be changed. Friends she made along the fence outside the clinic did the same. Prayer is powerful, and when God has a plan, nothing and no one can stop it.

Perhaps two of the biggest themes in the movie are redemption and forgiveness. Forgiveness not just of others, but of oneself. Abby struggles to forgive herself for her role in contributing to thousands of abortions and for her own abortions.

One of the other things I really appreciated about the movie was that it did not condemn women who have had abortions. As I discuss in my blog post the importance of life, a close friend of mine had an abortion years ago. She confided to me that, while she remains pro-choice, not a day goes by that she doesn’t think about her baby and what he or she may be like if she had chosen life. She struggles with forgiving herself.

Thankfully, we serve a mighty God, who can forgive us as far as the east is from the west (Psalm 103:12). Abby discovers this in Unplanned, as she, too, has had not one, but two abortions.

Is Unplanned difficult to watch? Yes.

Is it intense and grisly in parts? Yes.

Will it leave you emotional and burdened for the preborn? Yes.

Is it a movie for children? NO.

Sadly, when we entered the theater, we noticed that several back row seats were filled with little children – some about three or four years old and none older than about seven. While this movie is an important one, it’s not one for children. I honestly cannot state that often enough. It’s not for children. It’s not even for young teens.

Due to the graphic nature, this movie’s target audience is older teens and adults. And those older teens should be watching it with their parent(s) and discussing it afterwards.

But while this movie isn’t for young teens, it’s important to begin discussing with your children the importance of life. Our girls knew that a baby was a baby from the moment God placed it in a mommy’s tummy. That was our simplest explanation when they were little and discussions were age-appropriate as they grew older.

I would highly recommend this movie. But be warned, it will change you. Bring a box of Kleenex and a prayer in your heart. It will leave you with a prayer for people to again someday see the value of life from the time a baby is conceived in the womb, a prayer for those contemplating abortion that they would choose adoption or to raise the child themselves, and a prayer for those women who have had abortions. That God would heal their broken hearts.

Rating: Five out of five stars.

Penny Zeller is known for her heartfelt stories of faith and her passion to impact lives for Christ through fiction. While she has had a love for writing since childhood, she began her adult writing career penning articles for national and regional publications on a wide variety of topics. Today Penny is a multi-published author of over a dozen books. She is also a homeschool mom and a group fitness instructor. When Penny is not dreaming up new characters, she enjoys spending time with her husband and two daughters and camping, hiking, canoeing, reading, running, gardening, and playing volleyball. She is represented by Tamela Hancock Murray of the Steve Laube Agency and loves to hear from her readers at her website, www.pennyzeller.com, her blog, www.pennyzeller.wordpress.com, and through her newsletter via https://dashboard.mailerlite.com/forms/262119/74964679867237940/share. View All Posts

Welcome to my blog it’s great to have you here!

Dreams of the Heart

Love in the Headlines

Where the Heart Is